There is a short blurb on the Home page but if you are interested in the longer version of my story and how I came about to build JSK, please read on. I am not used to sharing so much about myself online but if my story helps to inspire someone else to follow their dreams and live the lifestyle they want to live, no matter what adversity has crossed their path, then that will make me happy

But first I’ll explain what makes the JSK range unique. To provide a range of quality, multipurpose, practical kitchenware for those who live in a tiny space such as a mobilehome, tiny house, apartment or boat – and who also value quality & style in their collapsible kitchenware.

What Makes the JSK Kitchenware Smart?

Perfect for your limited space, these pieces either fold flat when not in use or are of a compact size to fit in a small space.

Kitchenware that can go from
Freezer to Oven!
Truly multipurpose they will become your trusty friends in the kitchen you will use them that often. Made from premium grade silicone (Germand LFGB standard) rather than the typical FDA lower standard – safer for you and better taste.

What Does JSK Stand For?

So how did I come up with the name ‘Just Smart Kitchenware’ or JSK for short?  Well the ‘JS’ are the initials of my first and middle names so I thought about words that represented what my products represented that started with J & S and ‘Just Smart’ immediately sprang to mind! That is because they are just smart in so many ways – in quality, colour, & function!

Until 2014 Jacquie lead a ‘normal’ working life in the corporate world having spent 25 years in the IT industry in various roles including as a trainer, running a Help Desk, business analyst, project manager and consultant helping to improve business processes and outcomes in organisations in the public, Not-for-profit and private sectors.  She had always had an entrepreneurial desire bubbling away in her and found working in the confines of set times on set days extremely difficult.  But back then people stayed in the same role working for the same company for years on end – it was the normal and safe thing to do.  So Jacquie persisted but did change jobs every 2 years because something better either came along or she moved interstate.

Events in the couple of years prior to 2014 changed all that.  In 2012 Jacquie walked away from her life savings and nearly everything she owned to remove herself from an unsafe personal situation with a former partner. Then with zero net worth, decided that continuing to work for someone else (now in her mid-late forties) was not going to set her up for retirement. She had to do something different.  Having lost it all she had nothing else to lose which gave her the drive and determination to leave the safe and ‘normal’ corporate world and try something else.  She had to give it a go.

She took her passion, patience & persistence (skills that could not be taken away from her) along with her business skills and immersed herself in learning to create an ecommerce business and selling on Amazon.  Jacquie’s first product, a 3 piece travel cutlery set in neoprene pouch was the first on Amazon in the US to include a knife.  Whether it was luck, divine timing or something else, the cutlery set proved very popular and Jacquie set about building a business called ‘Roaming Cooking’ – recipes and kitchenware designed for travellers.

During this time, Jacquie also created and self-published a little pocket book of recipes for travellers called ‘The Backpacker Chef‘. 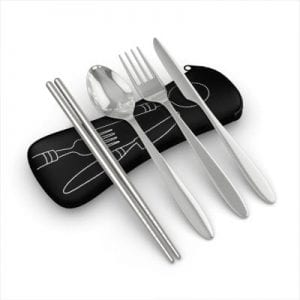 Life on the Road

Jacquie bought and lived in a little Teardrop trailer, travelling the east coast of Australia exhibiting her wares at Camping & Caravan shows and working on her online business from her laptop in coffee shops and in caravan parks. It was a lifestyle she adored.  The freedom, oh the freedom. To work when she wanted to work and not work when she didn’t.  To be able to open the door of her Teardrop in the morning and step straight out into nature, often in one of the most picturesque settings in the world. The freedom of having minimum belongings with her.  She never felt lonely, catching up continuously with other people also doing the rounds exhibiting at the shows – likeminded people with a love of business and travel just like her.

This is when Jacquie tested out a lot of the collapsible kitchenware. Two and ½ years later Jacquie sold the business and finally after 7 years from when she was left bankrupt by her former partner, Jacquie was financially on her feet again. There was no going back to the Corporate world permanently now and so Just Smart Kitchenware was born.

The initial idea was to focus on kitchenware that was ‘smart’ in some way be that ‘tech smart’, ‘space smart’, ‘eco smart’ or ‘design smart’ but that ended up proving a little difficult as there was no specific audience to target and help.  Given her love of travel, minimalist living, smart kitchen gadgets and love of helping others to come up with solutions to improve practical problems, Jacquie is now focussing on providing quality, multipurpose, space-saving kitchenware for those living in tiny spaces with tiny kitchens such as a Mobile Home, Tiny House, Small Apartment or Boat.

I would love to hear from you

If my story has inspired you in any way please let me know as I would love to hear from you.  Or if you would just like to say hi or offer any suggestions, comments about my products or website, I would like to hear from you too!